(I’m so excited to announce that today we’re having the first GUEST POSTER here on my blog! Please welcome Deborah O’Carroll!)

Draft Zero. What is it? And how can you use it to become a more efficient writer?

That’s what I’m here to tell you about today. :)

I’ve mentioned it often in the past on my own blog, and I’m finally writing about it. Others may use a similar technique—I don’t know. Or perhaps it’s something that is only my own unique method, and won’t fit for anyone else (though of course I hope it will be helpful or at least intriguing).

All I know is, it’s what I named a particular trick I use to help me write.

I used to call it “scene-plotting” or “pre-writing”, but neither of those quite fit, so I finally settled on “Draft Zero” because that’s what it is. Basically, it’s halfway between plotting and a first draft.

Plotting and first drafts are fine in themselves, but plotting is not actual writing, merely outlining, so it’s not the story yet. And first drafts, well… I have a problem with STARTING things. I mean to, but… there’s a lot of pressure, you know?

I’m a perfectionist, which is helpful when I edit, but not a good thing when I’m trying to simply WRITE. No matter how many times I tell myself it’s only a first draft and doesn’t have to be perfect, I still feel like it has to be brilliant to begin with. And so I don’t sit down and start writing. Because starting is scary sometimes.

In the words of Howl, “Only way I can do something this frightening is to tell myself I’m not doing it!”

Draft Zero, therefore, is how I “Howl” myself into Actually Writing.

I define Draft Zero as essentially getting the story down in its most basic written form.

It’s not quite an outline, but in some ways like that. It’s not quite “actual writing”, in that it might not even have proper sentences, and Nobody Is Allowed To Read It. At this point, it is only for me. And that takes loads of pressure off, somehow. But to make it be only for me, it has to be sub-First-Draft enough that I’m not tempted to perfect it yet.

Draft Zero is when I give myself permission to throw words around messily and just TELL the story and get this scene down.

Another handy thing about this is: when I’m writing, and I have a scene in mind, my fingers often can’t type fast enough to keep up with what I know is happening, and if I stop to craft each sentence, I’ll start forgetting the next bit I needed to write—especially those slippery bits of brilliant dialog that I don’t want to lose, but my characters are getting ahead of my typing fingers!

Draft Zero allows me to list everything in quick order without worrying about how I’m presenting it. Sentence crafting comes later. This is about raw STORY.

Sometimes you’re stuck and don’t know what’s going to happen next. Or you might have a vague idea of a scene you need to connect with this other scene, but you don’t know what happens between. That’s when just starting to jot things down, even if it’s as brief as a short list of vague things that could happen, can help get you through to the next thing. And sometimes that is just what Draft Zero is for.

It helps especially when I have a scene I have only a vague idea about and need to figure out how to fill it in, OR when I have a vivid scene (particularly later in the story) which I want to get down while it’s fresh in my mind, without committing to having actually written that part, since it will likely change a bit by the time I get there. (Yes, I write out of order sometimes. No, it’s not necessarily a good idea. But I can’t seem to help it, so.)

I’ve had particular success using this method to help me get the ending of stories down—when I was writing a short story, or my Rooglewood contest novella entry, and I kind of knew what needed to happen, but was scared to start trying to put it down, because ENDINGS and PRESSURE and how do I write the entiiire ending all at once? Well, I write those final few scenes in Draft Zero form, of course. And then they’re all laid out and waiting for me to polish them into a first draft ending.

When I write Draft Zero, I take a scene as mentioned above—either vivid or vague—and I sit down and tell myself I can just play with words and throw the scene onto the page and get it down in a basic form.

So, my rules for this writing technique are: there aren’t any.

This means I can slip around and write out of order even in the scene I’m writing. It can range from the briefest of descriptions, such as scribbling the note “they talk about plans”, to detailed descriptions of said plans, complete with the dialog and references to the characters’ movements/expressions as they talk, or a description of their surroundings. I can write without proper sentences, in sentence-fragments, without consistent tense, punctuation or capitalization. (I know, it’s horrifying; but nobody sees it and it seems to work for me, sometimes.) But that goes the other way too: I can write exact sentences with the precise wording I want, and punctuation and beautiful polish, right in the middle of all that mess, if I feel like it and if it wants writing.

One of my biggest things is getting the actual dialog down. I sit down, I get into the scene, and I start listing out things that happen, lines that are said, visuals, whatever—anything I’m seeing and hearing in my mind as I play through the scene. It all goes down, typed fairly quickly in list form, as I try to grasp everything and get it down. More like a screenplay in some ways, I guess. But more than a normal outline, because it will have snatches of actual first draft writing thrown in.

Sometimes I only do this for a brief time and then I automatically start writing “regularly” and it’s a first draft with bits of zero draft at the start. And that’s all right too—the trick has done its job and got me STARTED. Other times I’ll Draft Zero the whole scene, or a series of scenes.

But whether it’s simply laying a few stepping stones across the stream to reach firmer ground, or building an entire rough bridge to get filled in later, it’s still moving forward on the journey. 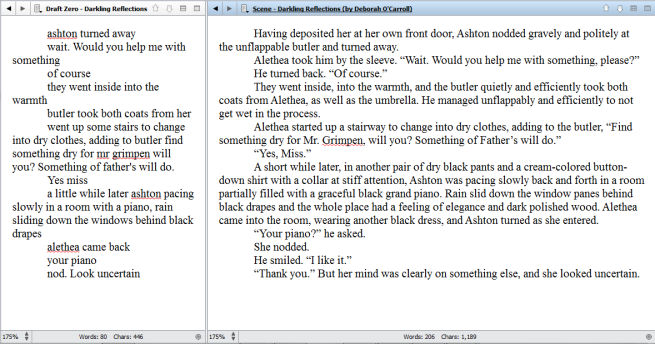 (Here are a couple screenshots of an example scene from a short story I wrote, called Darkling Reflections. The Draft Zero version is on the left; finished version on the right. Sometimes my zero drafts are more detailed, sometimes less, and are often far more difficult for people to understand. XD But this is one example.)

What now? What do you do once you have the story down in a messy format—but down all the same?

Once I’m done a Draft Zero section, there are two options. Either 1.) I’m content to leave it for now, since it’s “gotten down on paper” and I won’t forget it, and it can wait in a sort of limbo mode until I need it again (like when I get to that part of the story); or 2.) I almost immediately, the same day or soon after, go back through it and start turning the zero draft into a first draft.

I should note that I haven’t done more than a few scenes together in Draft Zero form—I haven’t ever done an entire story that way. I usually get impatient to turn the zero draft scene(s) into first draft. It’s something I’d like to try—a whole story in a zero draft version—but it hasn’t happened yet.

Usually having a Draft Zero section down makes me excited enough that I want to turn it into Real Writing right away. So I go through it—sometimes in order, sometimes not—and start taking that almost-shorthand series of notes and dialog and un-punctuated, uncapitalized, sentence-fragment-y flailing of words forming the scene in its most basic form (interspersed with actual writing and description), and I’ll quickly smooth them into sentences, add punctuation, and expand things (because I see more to the scene than the bare bones written there, so it’s only natural to put that down as I go).

And before I know it, I have a first draft of a scene or two, and usually in far less time than it would have taken me to craft a first draft scene in the first place—with the added bonus that the framework of jumping quickly from one thing to the other, as I was getting it down, keeps me from rambling all over the place. This means my scenes are (often, though not always) tighter and shorter, with more punch and less babble. (I’m a long-winded writer, if you haven’t noticed… so this is important to me. XD)

When I write in this way, I’m not spending all my time thinking about HOW to write this, I’m just… writing it. And I Howled (that is, tricked) myself into starting, when I didn’t want to, or didn’t know if I could, or was afraid to try. And even if I don’t turn it into Actual Writing right then, I’ll at least have the basics down for when I want it later.

If you don’t have a problem with sitting down and just getting the story written, then I applaud you! Perhaps a Draft Zero method is not for you. But you might find something helpful to pick out of it, all the same. I’d be curious to know if you think it might be helpful in the future! If some part of it intrigues you but another part doesn’t work for you, leave that out and just take what you think might help. Like I said, there are no rules—unless the rule is to keep making progress on telling our Stories in the best way for each of us. :)

And for all I know, oodles of people may use something very like this, and I only slapped a name on it and called it a discovery… In which case I’d be very curious to hear if you use this technique or something similar!

One more secret: I don’t use this just for writing my novels and short stories. That’s primarily what I use it for, yes. But I also use Draft Zero for other things—including book reviews, emails, and… well… I actually wrote the beginning of this post in a Draft Zero format. I didn’t know how to start writing this (my very first guest post), so I just used the technique I was going to talk about, and started listing out half-sentences about what I wanted to say—and in that way, I Howled myself into writing real paragraphs once I got into it… and here we are at the end!

It just goes to show that sometimes, before a first, there’s a zero—which is not necessarily a bad thing; that sometimes making a mess is the best way to make something beautiful; and that Howl’s Moving Castle and Draft Zero are two of my favorite secret weapons for becoming a better writer. ;) What are yours?

View all posts by Lisa Pickle